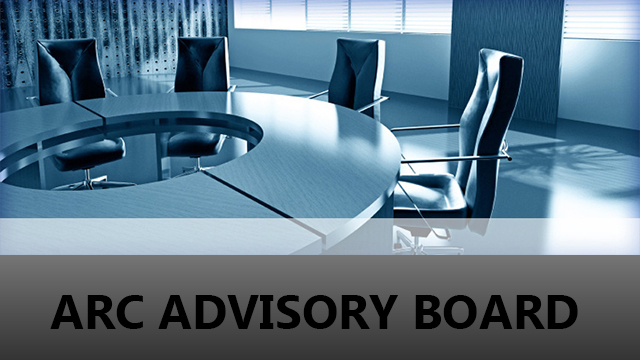 ARC's Advisory Board represents a group of professionals with specialized skills.

They are called upon as needed to offer insight and/or assistance to ARC's operations.  ARC's Advisory Board members also donate their time and efforts without requesting compensation.

A graduate of Loyola Marymount University, Susan serves on the Board of Directors for the Boy Scouts of America, Greater Los Angeles Area Council. She is also an Advisory Board Member for Stanton Chase Los Angeles, an Executive Search Firm with an International presence. Susan holds Seniors Real Estate Specialist designation with the National Association of Realtors, and a Palos Verdes Specialist certification with the Palos Verdes Peninsula Association of Realtors.

Michael Watkins has been in the motion picture business in virtually every capacity of design to execution. He has traveled extensively and lived in multiple locations both nationally and internationally edging his career with overseas film operations in war zones working with the military and other attached agencies. He has also worked extensively through the years with the (MCSF) Marine Corps Scholarship Fund and (TAPS) the Tragic Assistance Program for Soldiers. Versed on moving both large and small groups with great effect, purpose and completion within specific time parameters, Mr. Watkins has proven himself to be an influence of success when advising ARC on multiple operational levels and coalition building among the vast number of NGOs targeting child recovery and anti-human trafficking. He is currently birthing a veteran’s family network and developing shows that deal with the truths of children endangerment and issues that are active within the United States and the world at large.

With her entertainment career beginning in England, Katy Haber worked with legendary Director Sam Peckinpah, for eight years on seven of his films was Head of Production at EMI Films and produced Blade Runner for Sir Ridley Scott. She is a founding member and a Board member for 19 years of BAFTA LA, the British Academy of Film and Television Arts in Los Angeles and was Managing Director for five years. As Chair of the Outreach Committee she spearheaded the Helen Keller Park screening facility, which enables inner city communities to see first run movies in their recreation center. She was Executive Director at the Dome Village Homeless Shelter for 13 years, and has been active in Gang Prevention, and Youth Programs.

Mayer Nudell, CSC, is an acknowledged authority on terrorism, crisis management, travel security, and related international political and national security affairs. A former U.S. diplomat, Mr. Nudell received two Group Meritorious Honor Awards from the U.S. Department of State. His last Foreign Service assignment was to the Office of Counterterrorism and Emergency Planning as Latin American and Middle Eastern specialist and liaison with the business, intelligence, and law enforcement communities.

Adviser to CEO’s & policy makers on government and politics; John embraces his role as a guide helping organizations avoid political and public land mines while achieving their goals. John is a former Deputy Assistant Secretary in the office of Secretary of Defense Les Aspin and contributes regularly on National Defense and National Security issues in the United States. At times John serves as a consigliere delivering tough messages and making things happen behind the scenes. John is also an entrepreneur, founding and leading several businesses that deliver cutting edge products and services.

With years of experience in public policy, communications, international relations, business and government affairs, John is one of the architects behind engaging government with the creative arts community to bring innovative ideas and unique insights to issues of domestic and national security policy.

Ms. Shepherd is Executive Vice President and Chief Practice Officer at Michael Baker International. In this position, she is a member of the Executive Leadership Team and leads the firm’s strategic planning process. She also oversees Michael Baker’s overall practice leadership, spearheads communication and collaboration across practices, and engages practice leaders in the exchange of expertise and capabilities to develop innovative and cost-effective solutions for clients. Previously, Ms. Shepherd served as Michael Baker’s Senior Vice President and National Market Lead in the Railroad and Transit practice where she directed all activities related to the firm’s rail and transit national market. Ms. Shepherd’s extensive business experience spans nearly 30 years in fast-growing firms in the transportation industry. She is an established rail and public transit professional with proven capabilities in developing successful bid strategies, fostering teaming opportunities, and nurturing client relationships. She also possesses a keen understanding of multimodal transportation and managing marketing and proposal teams. Ms. Shepherd has worked in multiple modes of transportation, including transit, freight, highways and bridges, tunnels, federal markets, ports, environment, planning and aviation. Before her roles at Michael Baker, Ms. Shepherd served as vice president of corporate strategy at Systra, USA, where she worked with a specialized team of professionals to provide engineering consulting services with a focus on track, infrastructure, electrical and systems. Ms. Shepherd is an active member of the American Public Transportation Association (APTA) and a past Chair and current Board member of the American Public Transportation Foundation. In addition, she is a participating member of the APTA mentorship program providing coaching and motivation for our younger generation as they advance in the transportation industry. She also is an active member of the Women’s Transportation Seminar (WTS) in the New York and Washington, D.C. chapters, as well as several transportation industry associations.